From Open Mower Wiki
Jump to navigation Jump to search

Now that you have your hardware assembled and the basic software installed on your mower, we can calibrate the magnetometer and start recordings maps and mowing the lawn.

In order to follow this guide, you will need the following:

Test Setup for this Guide

For this guide, I'm using the following setup:

I have used a static IP configuration with the following settings: RTK base station:

After connecting the components as described and powering everything, make sure that the network connection works as expected. To do this ping the base station and the mower from your PC using both the IP address and their hostname. If both works, the network setup is successful.

Once you have confirmed, that the network is working correctly, test the RTK GPS. Do this by connecting to your mower using two separate ssh sessions: one for starting the OpenMower software and the other one for looking at the GPS data.

In the first terminal, start the GPS communication part of the OpenMower software by typing roslaunch open_mower _gps.launch. You should see some console output.

In the second terminal, run rostopic echo /ublox/navrelposned. There should be messages shown in the terminal. We are interested in the following fields of the message: TODO

Wait for the accuracy to reach the value of 100. Depending on your configuration, this might take some time. Wait at least 30 minutes before starting to debug anything. First time fix will take some time! If your accuracy number drops to 100 and is stable at this value, your RTK GPS is working as intended. If the values does not drop, there is an issue with the RTK setup.

If you are happy with your accuracy, stop the OpenMower software by pressing CRTL+C in your first terminal.

Example output of the mag_calibration node.

After verifying, that the RTK GPS is working as intended, you will need to calibrate your magnetometer. This is important, because the magnets and metal parts embedded in the mower will interfere with the magnetic sensor. That's why it's important to do this after finishing the assembly!

In order to start magnetometer calibration, start the OpenMower software on the mower using ssh:

This will start the communication layer between ROS and the mower's hardware.

Now start a second terminal and ssh into your mower.

You can test, that the communication works by using the following command:

You should now see the raw IMU data printed to the terminal. If this is not the case, you have an error in your setup.

Now you can start the calibration process by entering:

Now rotate the mower slowly around all three axes.

DON'T push the emergency stop button during the calibration. It has magnets embedded and will lead to wrong calibration.

As soon as you're finished, press the enter button. The final values are printed to the terminal.

You can copy and paste the values into your mower_config.sh.

Now reload the mower_config.sh by entering:

Finally, you can record your mowing areas and the docking station position.

There is also a YouTube animation available, watch that first and then read the following text: https://www.youtube.com/watch?v=j7qkwuoHJpI

I recommend that you start with a simple area with lots of space around first. This way if something goes wrong, your mower won't instantly crash. You will need to record at least one area and your docking station in order to start mowing.

Basically, there are three things to record: The Navigation Area, Mowing Areas and the Docking Station position. 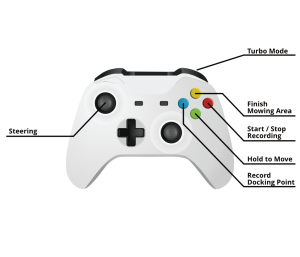 During recording mode, you can move the mower and control the recording process using the Xbox game pad:

You start and stop the recording mode using buttons on the mower:

At first I like to record the mowing areas. Start with one area which is obstacle free. As soon as you are more confident in the mower's positioning, you can add more areas complex areas which may also be close to obstacles.

In order to start recording an area, start the OpenMower software using:

Before starting the recording, make sure that you have a good GPS fix. You can do that by using the following command in a second terminal:

This will print the current GPS accuracy in 0.1 mm steps. At full accuracy, you should get a value of 100. If it is larger, check your GPS config!

Now, with the OpenMower software running and with a good GPS fix, you can start the area recording process. For this you will need a gamepad connected to your mower.

Start the recording process by either pushing the S1 button on your mower or by executing the following command in a terminal to simulate the button press:

You should now be able to move your mower using the GamePad (see controls section above).